Why Does My Pit Boss Keep Blowing Fuses? [Causes & What to Do]

Nothing is worse than trying to use your Pit Boss, only to run into problems. If You’re having issues with the fuse, you’ve likely wondered “why does my Pit Boss keep blowing fuses?” Well, here’s what I’ve learned after reading everything I can about it.

Why Does My Pit Boss Keep Blowing Fuses?

A blown fuse means the amp load is overloaded, a shorted wire in the wiring. If it happens at startup, it’s likely due to the hot rod drawing high amps causing the fuse to blow.

At startup more wattage is required. If any of the three main components use more power than normal, it will cause the fuse to blow.

It could also mean that a fuse has blown in your home’s circuit breaker (instead of the grill) although, not likely.

Troubleshooting a Pit Boss grill can be challenging. However, it’s a part of the process that comes when using electrical grills. In this article, we’ll take a look at the size of the fuse the grill uses, why it would blow, what to do when it happens, and how to replace the fuse.

Does The Pit Boss Have A Fuse?

The Pit Boss grill uses a 120 volt, 5 amp, fast blowing fuse to protect the board from the ignitor. When the grill is not working properly, especially at startup, it is most likely due to a blown fuse.

If it’s time to replace the fuse, you can find them on Amazon or purchase them on the Pit Boss main website. That said, you’ll likely receive them sooner on Amazon, and here’s Pit Boss fast blow fuses you’ll need to get your grill running again. 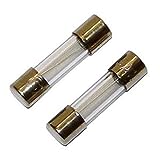 If the fuse is blown, the grill won’t light. You will notice a blank screen when the grill is plugged in and turned on. There are several other troubleshooting issues you can look for, but in this article, we’ll be discussing the Pit Boss fuse.

There can be a few reasons the fuse has blown in your grill. Below are some of the possible reasons and what to do if you’re experiencing this issue.

While not likely, but it could be that the circuit breaker in your home was tripped. If this is the case, you likely have lost power in certain areas of your home, instead of a full power outage in your home.

If this is the case, you will want to reset the circuit breaker. Resetting a tripped breaker is not hard, but you’ll want to figure out why it’s tripping.

The draft fan is one of the three components connected to the fuse box. It is connected via the yellow wire. It is a 120V, 50/60 HZ, 0.1 amp that starts up as soon as the Pit Boss is turned on.

If it uses too much power during the startup phase, it will cause the fuse to blow.

The auger is powered with 120V, 50/60 HZ, 0.22 amps, and 2 RMP motor. It is connected to the fuse via the red wire. At startup, the hot rod needs approximately 300 watts to ignite and feed pellets into the firebox.

After it has been running for a while, the grill will only draw about 50 watts.

If the auger uses more amps than normal or if the fuses are old, it can cause the fuses to blow. The only time a Pit Boss draws most of the power is during the startup when the hot rod is energized.

The ignitor is the last major component that utilizes 200W, 120V, 2.6 amps is connected via the purple wire. According to smoking forums, the ignitor is usually the culprit that causes the fuse to blow in pellet grills, regardless of brand.

Where Is The Fuse on a Pit Boss Pellet Grill?

The fuse is located behind the control board on the Pit Boss. Below is an image of the fuse box on the Pit Boss Pro Series 820. If you’re not sure where the fuse is on your Pit Boss, you can always refer to the owner’s manual.

You’ll find an electrical wire diagram of where to find the fast blow fuse.

How to Determine Which Component Is Blowing the Fuse?

Before troubleshooting the Pit Boss grill, ensure it is unplugged from the electrical outlet.

Now that you know the three main culprits that can cause the fuse to blow, you’ll want to use a multimeter to check the wires on the fan, auger, and igniter.

This video will walk you through how to check the wires using a digital multimeter and probe.

How to Replace Fuse on Pit Boss Grill

Now that your fuse is blown, it’s time to replace it so you can finish or start cooking. Here’s the step-by-step guide on replacing the Pit Boss fuse.

As your grill becomes older, it is not unusual to experience a blown fuse. Many current Pit Boss owners who experience the issue have said that the ignitor is usually the culprit.

Hopefully, this article helps you understand and troubleshoot what’s causing the fuse to blow.

Check out some of our other Pit Boss troubleshooting articles for the following: