Pit Boss Meat Probe Not Working? Here’s What To Look For

Why is it taking so long to cook a whole chicken on the Pit Boss Grill? The recipe you’re following said it would only take 3 hours at 350°F. Yet after two, the chicken’s internal temperature has plateaued at 110°F. This makes you wonder “is the Pit Boss meat probe not working”, and how do I test it for accuracy? Well, let’s find out what you can do to troubleshoot your meat probes.

Why Is The Pit Boss Meat Probe Not Working?

If the meat probe is not working, it could be due to a broken probe tip, you received a defective meat probe, not inserted correctly, or it went bad over time.

Like any electrical appliance, you can run into issues like the meat probes not working properly. This article will discuss how to tell if the probes are working correctly, how to test them, and how accurate they are.

Okay, let’s find out what’s wrong with your meat probes.

But First, What Are Pit Boss Meat Probes?

The meat probes are the digital control meat thermometers that measure the internal temperature of your meat. They plug directly into the P01 and P02 slots on the grill and then display the temperature on the control board.

You can read more about the Pit Boss MPC and what it does in this article.

Most Pit Boss grills will automatically come with one meat probe. I suggest buying another one, especially if you grill a lot.

I’m going to assume you know how to use the Pit Boss meat probes. If not, then you need to understand how to use them properly before troubleshooting them. I’ve written a complete guide on using them, so be sure to check it out.

There are several reasons the meat probes can stop working, and below are the most common reasons.

Your Meat Probe Has A Broken Tip

The probe has a 3.5mm jack that inserts directly into the control board. If the jack breaks off and gets stuck in the controller, it will need to be removed. You will need to purchase a jack removal tool.

Pull the jack removal out, and the broken tip should come out with it. If it doesn’t come out easily, you may need to use your fingers or a pair of pliers to get the broken tip out.

You will need to purchase a new meat probe after removing the broken tip. 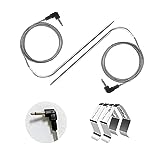 These are the identical meat probes I bought for my Pit Boss from Amazon. They come in a two-pack, and I haven’t had any issues with them.

If it’s your first time using the meat probe and it isn’t working, it could be that you received a defective one. Product defects are common in manufacturing, especially when things are mass-produced.

After testing your meat probe, reach out to the Pit Boss customer support to let them know you received a defective probe. They will likely send you a brand new one without any cost to you, especially if it’s a new grill.

It could be that the wires came into direct contact with the flame or excess heat, which caused them to stop working. Maybe the meat probes were submerged in water after your last cook?

If the meat probes are exposed or soaked in water for long periods of time, it will display an erroneous reading on the control board. It won’t be hard to know if the probe is bad, as you will see unfamiliar errors.

There are many reasons a meat probe can stop working. They are not designed to work forever. This is the reason you should always have some backups on hand.

It could be something as simple as the meat probe is not properly connected to the port. You will be able to hear the probe snap in place when it’s connected properly.

Testing The Probes for Accuracy

It’s normal for a Pit Boss meat probe to be off by 15 degrees or more, depending on where you’re grilling. Unfortunately, I couldn’t find any information online as to whether you can calibrate the meat probes or not.

I did find a video that shows you how to calibrate the digital thermometer if you’re having issues with it.

That said, you can still run some tests and compare them with a thermometer you know works. When I got my new meat probes, I one of the new meat probes and the one that Pit Boss sent me.

This test allowed me to see how much of a difference or how accurate the Pit Boss probe was. You can use the same method with any other thermometer you own.

Testing the thermometer against the meat probes will help you know how accurate they are. If it’s too far off, then you may want to consider using just the thermometer.

I’ve always found it best to use more than one thermometer to see if my food is cooked to the proper temperature.

Your Grill Shuts Off When You Plug In The Probes

If your Pit Boss shuts down automatically as soon as you plug in the meat probe, it’s likely due to an electrical discharge. This is a safety feature that is built into the grill.

To fix the issue, ground yourself by touching the grill frame and keep hold of the frame while plugging the meat probe back in.

If the grill continues to cut off, try disconnecting it from the electrical outlet, wait 15 minutes before turning it back on and trying again.

Here’s some other reasons the Pit Boss keeps shutting down, that have nothing to do with the meat probes.

Unfortunately, many people have issues with the Pit Boss meat probes. Hopefully, this article helps you troubleshoot the problems you’re having with them.

Before getting rid of them or buying some new ones, make sure you understand how they work and how to use them. I’d recommend testing them properly before your next cook.

This will help you know whether they will work correctly or if you need to order some new ones before your next cook. You can also opt to get a different type of meat thermometer instead.

If your meat probes are not working properly, it doesn’t mean you can’t use your pellet grill. It just means you need to invest in a better meat thermometer that you can trust!