How To Replace The RTD Temperature Probe On A Pit Boss? [With Video]

If you have a Pit Boss smoker, then you know that the RTD temperature probe is an important part of the smoking process. This probe helps to ensure that your food is cooked evenly and at the right temperature. If your RTD temperature probe starts to malfunction or fails altogether, don’t worry – it’s easy to replace! I’ll walk you through on how we did it, as well as how to if it needs to be replaced.

What Is The RTD Probe?

First of all, before you replace the RTD probe, you first need to know what it is and where it’s located on the grill. The RTD probe is a sensor that reads the internal temperature of the grill.

It then communicates the readings with the controller to help maintain a consist temperature. This in turn ensures the food cooks evenly and thoroughly, based on your settings.

Can You Replace The RTD Temperature Sensor on a Pit Boss?

Yes, most people won’t have any issues replacing it. You can purchase an OEM (original equipment manufacturer) RTD probe on Amazon and replace the original one that came with your grill. That said, if your pellet grill is under warranty, Pit Boss may send you a replacement.

How to Know When The RTD Probe Needs to Be Replaced?

If you’ve never had to deal with an RTD malfunction, you likely won’t know when it’s time to replace one. At least that’s what I experienced with my first malfunction. Here are some ways to tell it may be time to replace your RTD probe.

You know your grill the best and you’ll know whether or not it’s cooking the right way. When I replaced mine, I started getting an ERL error code halfway through the cook.

When the code came up, I wasn’t even able to turn the grill off manually. Instead, I had to unplug it from the outlet. Continually doing that can cause other parts of the grill to become damaged like the auger, so you want to avoid using the grill if you keep getting error codes and find out what’s causing it.

You can always refer to the owners manual or contact Pit Boss support if you’re having issues with your grill.

How Long Does A RTD Probe Last?

An RTD temperature probe is a part that lasts anywhere from 1-2 years or longer before needing to be replaced. That said, every part is different and may need to be replaced sooner.

Similar to how you can purchase one brand of vehicle and never have problems, while a different vehicle can give the owner all kinds of problems. Even though they were manufactured by the same company, one may be considered a lemon.

The same thing can happen to parts in a pellet grill. There are some pellet grill owners in this forum that have said their RTD probe had to be replaced in just six months after purchasing their grill.

Unfortunately, it’s hard to say how long it will last. The longevity depends on the quality of the part, how well it’s maintained, and whether or not you break it. The great thing, is that there are some things you can do to take better care of the sensor, which I’ll discuss below.

But first let’s look at how to replace it.

How To Replace the RTD Probe? [Step-by-Step]

Replacing the RTD probe is not as complicated as you might think. We just replaced ours this past weekend and now it’s running like new. Here’s what we did to replace it.

I’ve also recorded a video, if you prefer watching it. However, I’ll explain everything we did in the video below, for those of you who prefer a step by step tutorial.

What You’ll Need to Replace the RTD Probe

Okay, now that you know the tools you’ll need, let’s get started. 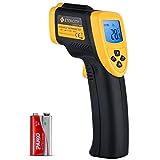 Place the pellets in a bucket as you’ll want to put them back into the hopper once you’ve replaced the RTD temperature probe.

Place a bucket, stool or something that is about the same height as the hopper next to it. You’ll then want to use a phillips screw driver to remove the four screws. Two will be found in the front and the other two are in the back.

Once the hopper is unscrewed, carefully remove it from the grill and place it sideways on the bucket. The bucket ensures it is secured properly, so it won’t fall on the ground.

Step #3 Clean Up All The Pellet Dust

The first thing you’ll notice when you pull the hopper off, is how much pellet dust has accumulated on the auger motor, and the auger. While this step is not necessary, it is a good time to clean vacuum the dust.

I’m not sure if the dust can eventually cause problems. But I’m sure that allowing the dust to build up too much can cause problems for both the auger, auger fan, and other components.

Since you have access to the parts you never see on a regular basis, you may as well clean them up. We even went as far as removing the auger and cleaning it up.

To remove the RTD probe, open the grills lid and you’ll notice the temperature probe on the inside of the grill. It’s located on the same side as the hopper.

Using an Phillips screwdriver, remove the two screws from the RTD probe cover. Then slide the cover upward, and place both the screws and cover in a safe place.

Next remove both the screws and the nuts from the RTD probe. Use some pliers or a wrench to hold the nuts on the bottom of the RTD, while unscrewing the screws with the Phillips screwdriver.

Don’t worry about losing those screws, as the new RTD Probe comes with a new set. We didn’t know that and put the old ones back on it.

Then grab a flathead screwdriver or something sharp that you can get under the edge. Use a hammer to tap it, which will loosen the RTD probe from the grill. You may have to tap it more than once, depending on how caked in it is into the grill after years of use.

Step #5 Disconnect The Probe and Push It Through the Hole

Disconnect the probe from the control board connection. Push the tab on the side of the black connector, while at the same time pull the connectors away from each other.

Feed the RTD probe wire through the hole on the side of the grill, until the whole wire is through it. Then pull the RTD probe out and remove it completely from the grill. 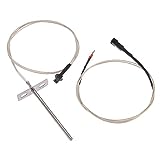 Grab the new RTD probe you’ve purchased, this is the one I got and just do the opposite. Feed the wire through the hole until the probe sits inside the grill. Reattach the screws and nuts.

Once you start the nut, hold the nut with your pliers and use a screwdriver to tighten the screw. After getting the first screw in place, don’t tighten it completely, until you get the other screw and nut in place.

After both screws are in place, make sure the RTD probe is in the center, where the cover is going to go. Then tighten the screws. they just need to be hand tight.

The final step is secure the hopper back into place the same way you took it off. However, before securing it back in place, you may want to use some wire ties to ensure all the wires are securely in place.

Zip ties will help keep the wires organized and prevent them from tangling with each other. Plus, you don’t want to risk one of them coming into contact with the auger fan when the grill is running.

Can You Use the Pit Boss With A Malfunctioned RTD Sensor?

It is possible, but not recommended. If the RTD probe is not functioning correctly, it will be hard to cook the foods throroughtly, because the grill won’t keep a consistent temperature.

Plus, you’ll keep seeing the ERL error code on the control board, meaning the grill got too hot. This in turn will require you to unplug it while the fan is still running, which overtime can cause other parts such as the auger to mess up.

Instead, it’s best to replace the malfunctioned part with a brand new one. It’s not difficult and the new part isn’t as expensive as buying a new grill.

How to Care for The RTD Probe?

The best way to care for the RTD probe is to clean it on a regular basis. This will prevent it from accumulating a lot of gunk which can prevent it from working properly.

In addition, avoid moving the grill right after grilling. I’ve read online (can’t remember where I read it) but moving it while the RTD probe is hot can cause it to break.

Replacing the RTD temperature probe is not hard, however, you may want to give yourself 30 minutes to an hour if you’ve never done it before. The process is fairly easy, and will save you a lot of money, rather than buying a whole new grill.

We hope this tutorial was helpful in showing you how to replace yours, when the time comes. You don’t need to be a mechanic to do it, as long as you know how to use a screwdriver, then you’ll have no trouble at all.

So give it a try and see how much better your Pit Boss pellet grill works with a new RTD probe!