Pit Boss Smokestack [Adjustments, Cleaning, Mods & How to Use]

The Pit Boss smoke stack is a huge topic on online forums. Should it be open or closed when using it? Does it need to be cleaned? Most people, including myself, don’t really understand how to use the Pit Boss chimney. In this article, I’m going to share everything I’ve learned about it.

The chimney is located on the side of the main barrel, on the opposite side of the hopper. When adjusted properly, it provides proper airflow to help improve accurate cooking.

Unlike the traditional gas and charcoal grills, some pellet grills have smoke stacks. According to this Reddit post, you don’t need one, as pellet grills use a fan to force airflow.

So, if it’s not important, why are so many people adding one to their grill?

If your grill has one, there are several things you should know about it.

When I first got my Pit Boss, I had no clue how to use it. To be honest, I still don’t know that much about it. However, I wanted to share how I use it.

In this article, we’re going to discuss how to adjust the chimney. How to clean it and how often. The best way to add a smoke stack to your Pit Boss, as well as the most popular mods.

But first, let’s look at the science of thermodynamics to better understand how the chimney works.

Thermodynamics is basically the calculation of heat loss coefficients of wind velocity, steel, air density, moisture content, and surface area. If you’re not a physics person, it may not mean much to you. However, it affects how the smoke stack works on a grill.

Most people, myself included don’t understand the science of Thermodynamics. All we want to know is how do you adjust it for the best results.

If you’re a technical person, you can read more about Thermodynamics.

Should the Pit Boss chimney be open or closed? According to the Pit Boss manual, a wider opening when cooking at lower temperatures will allow for better airflow.

So what’s the perfect height? Well, the answer will vary depending on who you ask. Some people say the chimney should be high enough to stick a thick piece of cardboard between it.

While others say it should be wide enough to put your index and middle finger in between the cap and pipe.

According to the Traeger website, you want to have a 1-2 inch gap between the top of the chimney pipe and the bottom of the chimney cap. A smaller gap can lead to poor airflow.

This most likely is the case for Pit Boss and any other pellet grill brands as well. Since reading that on a forum, it’s how I’ve adjusted my smoke stack and haven’t touched the height since.

Does The Chimney Need to Be Open?

If your Pit Boss has a smokestack, it should always be open. If you lower or close the cap, you restrict the airflow, and it produces less heat.

The air is not able to flow freely, which could cause a buildup of gases in the grill, which could lead to an explosion.

If you’re grilling in the winter or on a windy day, leaving a smaller opening on the chimney can prevent the temperature from fluctuating. But you should never close the chimney completely.

Some grills have pre-modified smoke stacks that you can’t adjust. If you take a close look, they are open not closed.

How to Adjust Chimney On Pit Boss?

Basically, the only time you should adjust the smoke stack is when the grill if first assembled. Ensure it has a 1-2 inch opening and then leave it alone.

Here’s the height of my smokestack, in case you want to know how high I have it set. It’s about an inch high from the bottom of the cap to the top of the pipe.

How to Use Smoke Stack on Pit Boss

There’s nothing for you to do to use the smokestack. When set to a proper height, it will provide better airflow throughout the grill.

Many people have said the only time to adjust the chimney is when you’re cooking in cold windy weather.

Other than that, there’s no reason for you to touch the chimney on a regular basis.

How to Clean The Pit Boss Chimney

The pellet grill chimney should be cleaned every 6 months, depending on how often you use it. Ensure the pellet grill is cool to touch and unplugged.

Remove the chimney cover and clean the chimney’s interior with an old cloth you don’t care about or a gentle brush. A dirty chimney will have a lot of black soot on it.

Ensure you clean the back of the barrel where the chimney is attached as there will be a lot of buildup behind it.

Avoid using water to clean the interior of the chimney, as it can cause the grill to rust. Once cleaned, you can attach the chimney cover to the pipe.

Smokestack modifications are popular among the smoking community. Some people are interested in modifying their smokestack for better airflow, while others just want a cooler look.

The video below shows you how to add a bigger smokestack to any pellet grill. He claims that a bigger chimney will improve the efficiency of your smoker, as well as vent hot gasses away from your face while cooking.

He’s modifying a Traeger in the video, but the same steps can be used for modifying a Pit Boss pellet grill.

If you prefer reading along with watching the video, I transcribe what the video talks about below.

Where to Find a Pellet Grill Smoke Stack?

The best place to find a replacement or new smoke stack for your Pit Boss is online at Amazon or the Pit Boss website. This one on Amazon fits Camp Chef, Pit Boss, and Traeger grills and comes with the entire kit you’ll need to get it attached. 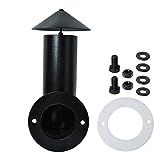 Hopefully, this article helped you understand your unanswered questions about the Pit Boss smokestack. Like I mentioned, I hardly ever adjust mine.

If you’re an inquisitive person, then play around with the different adjustments, to see which height works best for you.