How To Smoke Brats On A Pit Boss Pellet Grill? [Step-by-Step]

Smoked bratwurst are one of my favorite things to prepare on my Pit Boss. They are simple to prepare and smoking them gives them a unique flavor you can’t get on from a gas or charcoal grill. This step-by-step guide will walk you through how to smoke brats using a Pit Boss.

Can You Smoke Brats On A Pit Boss Pellet Grill?

To smoke the perfect brat you’ll need the following:

Bratwurst is a German link sausage typically made with veal, pork, and sometimes beef.

Smoking the brats is easy, but it will take some patience on your part to let the meat cook at low temperatures while absorbing the flavor from the flavored pellets.

Once you learn how to smoke your own brats, you’ll never want to eat anyone else’s!

Before we jump into smoking the brats, you first have to find the right brats to smoke.

All great brat recipes start with a great brat. There are literally tons of different store-bought brands to choose from.

When you’re cooking for a lot of people, you may want to pick up some brats from Costco. The bulk packages will feed several people without worrying about running out.

If you’re in a hurry you can find the popular Johnsonville brats at your local grocery store. But don’t forget to look at the meat counter, as sometimes you can find fresh brats for a great price.

As mentioned, there are several brands to choose from, and here are some of the best brats to smoke.

Should You Boil Brats Before Smoking?

If you’re buying pre-cooked bratwurst, you can smoke them right out of the package. They likely have already been pre-boiled.

Some people will boil the raw variety in beer, water, or other types of liquid. Boiling the brats makes the casings tender so they don’t break during the smoking process.

That said, boiling the brats before smoking can cause the seasonings to leach making them taste bland.

If you’re concerned about the casings breaking, the best thing to do is to put some beer, water, etc in a foil pan, dish, or pan and place it in the grill with the brats.

The liquid will keep the brats moist and should prevent the casings from breaking.

Boiling the brats before cooking is a personal choice.

Most store-bought brats are preseasoned with savory herbs and spices. If you’re looking for a great brat seasoning, you may want to consider the Traeger Rub (or any of your favorite rubs) before putting them on the grill.

This is the rub I use for my brats because the garlic and chili pepper give the brat a great taste.

Apply your favorite rub at least 30 minutes prior to smoking. This will give the rub enough time to penetrate the meat.

How to Smoke Brats on A Pit Boss Pellet Grill

Step One: Preheat The Grill

Pull the Pit Boss out of the garage, storage building or away from the wall. Open the hopper to make sure it has enough pellets to do the job.

Close the flame broiler as we’ll be cooking the brats over indirect heat. Turn the temperature setting to the ‘smoke’ setting or preheat the grill to 225°F.

Don’t worry, you’ll still get a great smoke flavor, even if the grill isn’t set on the smoke setting.

The main thing is NOT to set the temperature too high, otherwise, the casings will rupture and you’ll end up with dry, tasteless brats.

Step Two: Place the Brats on the Grill

Once the grill has reached 225°F place the brats on the main cooking rack. Position the brats so they don’t touch.

Close the lid and let the grill do its job.

Step Three: Do You Flip The Brats?

You don’t have to flip the brats, but I always roll them over to the opposite side halfway through the cook. This ensures that both sides get cooked evenly.

That said, the brats will cook evenly without rotating them. As the pellet grill cooks with combustion air similar to a convection oven. Meaning the food cooks evenly without any effort on your part.

Step Four: Use A Meat Thermometer

The Pit Boss probe makes it easy to monitor the internal temperature without having to open the lid.

Since installing the Smoke IT control board, I no longer have to lift the lid to see if the meat is done.

Step Five: Remove from Grill and Let Them Rest

Once they reach a safe internal temperature, remove them from the grill. Place them on a cooling rack and allow them to rest for 5-7 minutes before serving.

The resting period will allow the juices to redistribute back into the brats ensuring every bite is tender and full of juices.

How Long Does It Take to Smoke Brats?

It will take about 1-2 hours for the brats to cook completely. The cooking temperature will vary depending on the number of brats being cooked, outside temperature, and grill temperature.

Regardless of how long it takes, the brats are not done until they reach an internal temperature of 160°F.

A perfectly cooked brat’s skin will look golden brown and be slightly wrinkled.

That said, always use a handheld thermometer to ensure the brats are not overcooked. The great thing is brats are pretty forgiving and even if you overcook them to 170°-175°F, they will still taste delicious.

This is what makes them great for a beginner smoker!

Best Pellets to Use for Smoke Brats?

The flavored pellets to use will depend on the seasoning you’ve chosen. That said, hickory, apple, or maple are best for smoking brats.

Both apple and maple-flavored pellets will inject an incredible sweetness that is popular in sausages.

Hardwoods such as oak produce a nutty flavor that doesn’t do any justice for brats.

Buying several different flavors of wood pellets can be expensive. That’s why I always make sure I have a bag of the Competition Blend.

They are a delicious blend of maple, apple, and hickory which make them perfect for pairing with any type of meat. 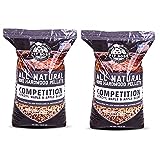 What Temperature Do You Smoke Brats?

The secret to cooking the perfect brat is to smoke them at 180° – 225°F for one hour. Then slowly increase the heat to 300°F until they reach an internal temperature of 160°F.

There is no shortage of brat recipes online. In fact, here’s one that I’ve found and have tried myself. It’s extremely easy to make and you likely already have all the ingredients in your home.

Should You Poke Holes in Bratwurst?

Poking holes in the skin will allow the fat to leak out causing the sausage to become dry. The fat keeps the flavor, and brats moist.

No matter whether you’re cooking pre-cooked or raw brats, it’s important to cook them low and slow. Expect it to take at least 1-1.5 hours, or until they are golden brown and have an internal temperature of at least 160°F.

Pick up some Johnsonville brats at your local grocery store and throw them on the Pit Boss. You’ll understand why smoke brats are so popular!